Contamination is always a factor when growing mushrooms. No matter how clean and sterile your preparations and techniques are, it will, at some point find its way into your grow bags, jars, petri dish or tubs. It is part of the game and the only control you will have is to reduce the chance of it happening.

Contamination is anything unwanted in your substrate or mycelium that can cause long-term problems. They can spread very quickly so it is important to get rid of the contaminated cultures and separate them from the non-contaminated ones.

How to identify contamination?

Contaminations can be easily identified – discolouration being one of the most obvious signs. If you spot green, blue, gray, or black patches, your culture is most likely contaminated. However, keep in mind that blue stains on the mycelium may just be bruising and not mould, especially if the grain presses the mycelium against the glass jars and plastic bags or tubs. To determine if you have a contamination or bruised mycelium, gently wipe a Q-tip over the discoloration. Mould will colour the swab while bruising will not.

Aside from mould, slimy patches on your substrate or mycelium can also be a sign of contamination, which signifies excess moisture and presence of bacteria. 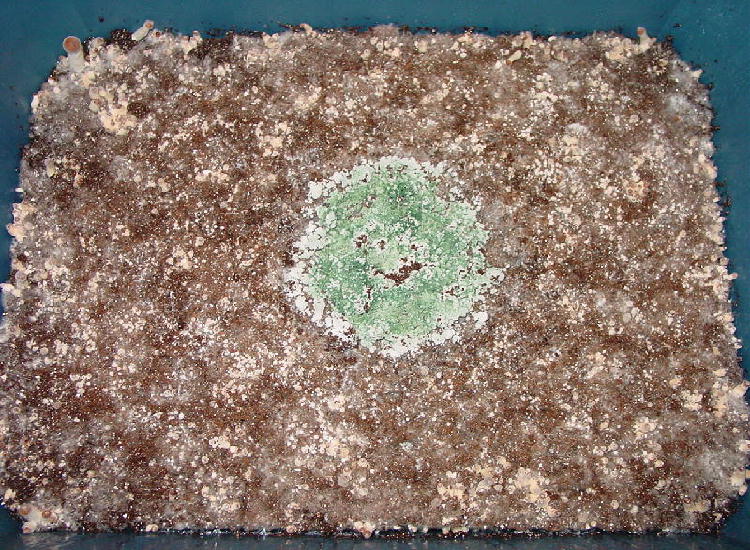 Trichoderma harzianum is the most common contaminant found in mushroom growing and the easiest to identify, but one of the most difficult to contain as it grows fast. This mould is usually blue green in colour and preys on other fungal mycelium. Trichoderma produces an aggressive white mycelium that will cover the casing and cause a soft decay in mushrooms before producing spores that are emerald, green.

It can be quite difficult to spot Trichoderma in the stage of growth right before sporulation as it may appear similar to the mushroom mycelium. However, it will have a fluffy appearance rising from the substrate while the mycelium is more rope-like and stays tight on the substrate.

Once it starts to sporulate, the best course of action is to quickly get the trichoderma-contaminated medium as far away as possible to prevent the risk of it spreading to your other grow bags, jars and tubs. Afterwards, the affected area should be sanitized thoroughly before starting another grow.

The most common type of bacterial mushroom contamination is known as “wet spot” or “sour rot:”. Bacterial contamination on grains is characterized by a dull gray slime with a sour-smelling stench and it makes the grains look excessively wet.

Bacterial endospores can be heat resistant. In order to prevent contamination, the grains are typically soaked for 24 hours before sterilizing them to allow the endospores on the grain to germinate and be killed off during sterilization. Without the soak, the bacteria can remain dormant and survive the sterilization process.

Cobweb mould looks like cobwebs and can be easily confused with mushroom mycelium by beginners because of its similar appearance, except for its colour. While mycelium is bright white, the cobweb mould is light grey.

To differentiate cobweb mould from mycelium, take a closer look at its structure. The mould is wispy compared to the rope-like hyphae of mycelium and grows three-dimensionally above the substrate. It also has a distinguishable smell of a damp basement.

Cobweb mould spreads fast. A small patch the size of a penny can cover an entire tub in a day or two. When cobweb mould comes in contact with baby mushrooms, it hinders their growth and in some cases, may prevent them from growing at all. The mould will wrap the mushroom with its wispy mycelium causing a soft rot.

If cobweb mould is spotted early, it can be eliminated by a hydrogen peroxide spray. This spray will not harm the mushroom mycelium but will kill any mould in your tub. This contaminant also prefers high humidity, so lowering humidity and providing more air circulation can limit its potential for contamination. 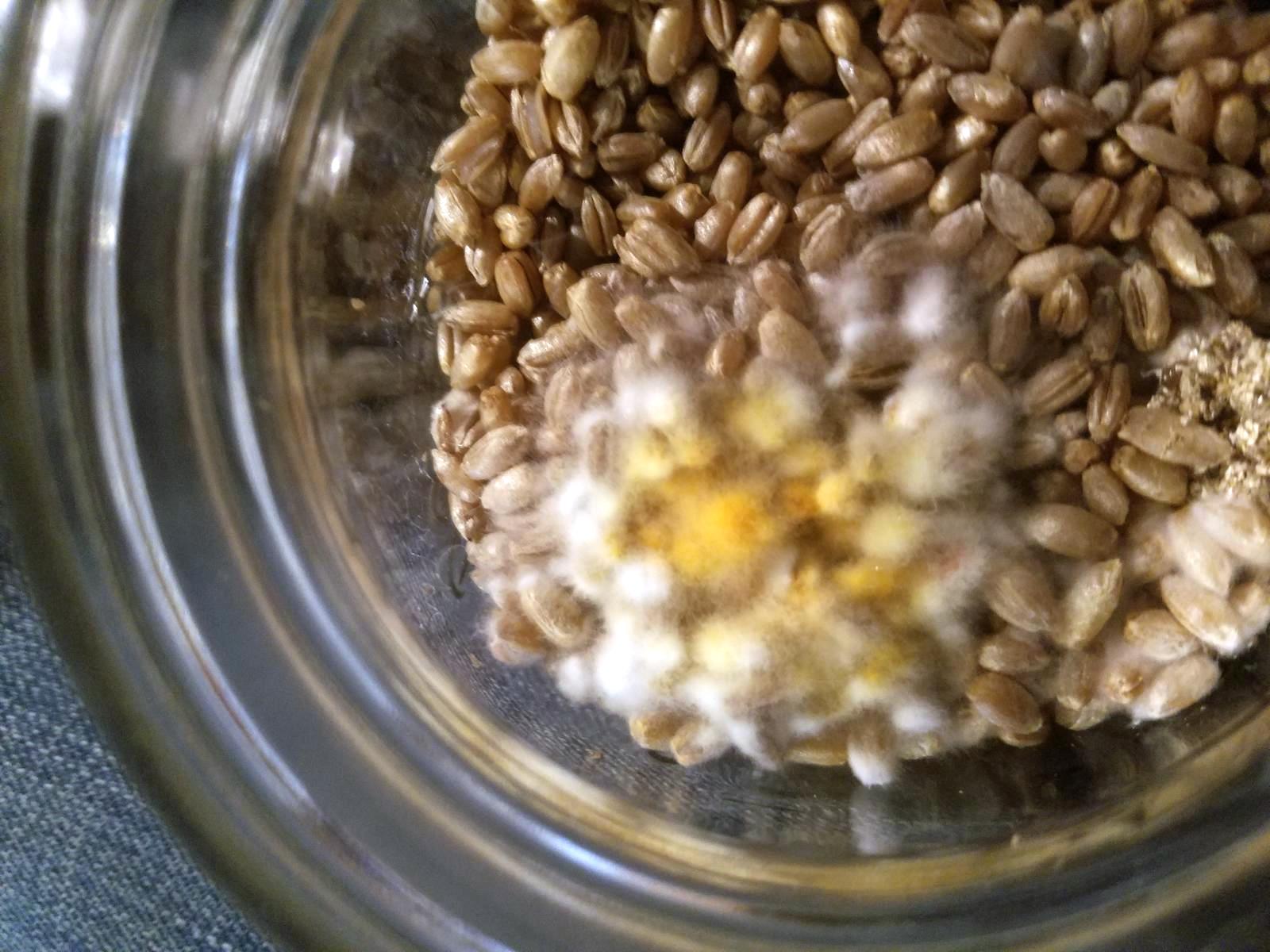 Orange Bread Mould or Neurospora crassa is very common in nature and extremely fast growing. It can overtake the mushroom mycelium in a short span of time. It commonly grows through cotton stoppers and filter discs and can be very hard to eradicate.

This contaminant is bright neon orange. It has a fine orange wispy appearance at first which will develop into a bright orange powdery patch and if left to grow, will form orange lumpy formations.

Contaminated cultures should be carefully sealed in a plastic bag and disposed of immediately. This is to prevent it from spreading spores into the air and contaminating your other cultures. A thorough cleaning of the area that had orange bread mould nearby is also necessary.

Also known as Pin Head Mould, this fungus is a food decomposer and is usually the first mould to appear on stale bread. It usually grows in indoor environments and also exists in the soil and in the air. This contaminant can be carried to your mushroom fruiting blocks by gnats or fruit flies.

Black bread mould has a similar wispy appearance with Cobweb mould except for the tiny black head on the ends of the mycelium.

If you see this mould forming in your fruiting block, abandon it immediately as it could be dangerous to people with a weakened immunity. Inhaling the spores or eating mushrooms that have grown near the mould could cause infection and illnesses.

Create a new account with us and you’ll be able to: